In the news! Abio Properties Realtor Mariah Bradford was featured on NBC Bay Area News for going "above and beyond" to help a 62-year-old Army veteran and his disabled wife purchase their first home.

We initially told you in November about Mariah's quest to help Eddie Mitchell and his disabled wife Ve purchase their first home in Antioch.

A LOT has happened since then...

Almost a year ago, Eddie and Ve learned the landlord of their Antioch apartment planned to nearly double their monthly rent. Shocked and scared, they didn't think they'd ever find secure housing again.

Eddie never owned a home; always a renter and struggling to make ends meet with his job at Home Depot.

But when Eddie's rent spiked, his sister suggested he call a real estate agent she knew and trusted – Mariah Bradford.

Mariah said that when she heard Eddie's story, including his fears about becoming homeless again (Eddie had fallen on even harder times a few years earlier), "I was so angry that I decided come hell or high water we would get Eddie and Ve a home. Otherwise, they would always be at the whim of a landlord and never able to have equity or security."

“If you have (a real estate agent) who cares more about you than the commission, you found a good one. But then if you’re really lucky, you find someone like Mariah Bradford.”

Mariah herself also had experienced hard financial times in the past. That's what drove her to keep fighting for this couple's homeownership dreams.

In the end, Mariah donated countless hours, her commission, and nearly $2,000 more to the cause.

"Because of the hard times I’ve gone through, I made the decision that I will value the individual client, not the number," she told NBC Bay Area reporter Garvin Thomas.

Mariah first guided Eddie through the VA home loan application process. After he was approved, the home search began.

Eddie faced another barrier: Finding a seller and listing agent willing to take a VA buyer. There is a lot of fear and prejudice around VA loans. Agents and sellers mistakenly believe the loans are difficult to deal with, Mariah said.

After a nine-month search that reached as far as Sacramento, their offer on a modest two-bed, two-bath condo in Antioch was accepted in November.

The catch: This place was far from move-in ready.

"I can’t even describe how badly it SMELLS. And I would not step on that filthy carpet barefoot for anything!" Mariah said at the time.

The condo had been a Section 8 rental for many years. At a minimum, it needed new carpet, paint, and repairs to the kitchen. Doors were falling off hinges, and anything metal was rusted. The kitchen had mold and mice issues. See photos in our previous post.

Mariah launched a GoFundMe campaign for the renovations. Then, as news spread, the construction community shared its generosity, too. Richmond Pallet donated floor tiles for the bathroom and kitchen. Christiansen Fasteners of Livermore donated 20 gallons of paint.

During Thanksgiving week, a small crew – including Mariah and her two children – worked hard and fast to get the place ready for the holidays.

NBC Bay Area News was there when Mariah did the big reveal and handed the keys to a grinning Eddie.

"Keys! To my house!" he exclaimed. 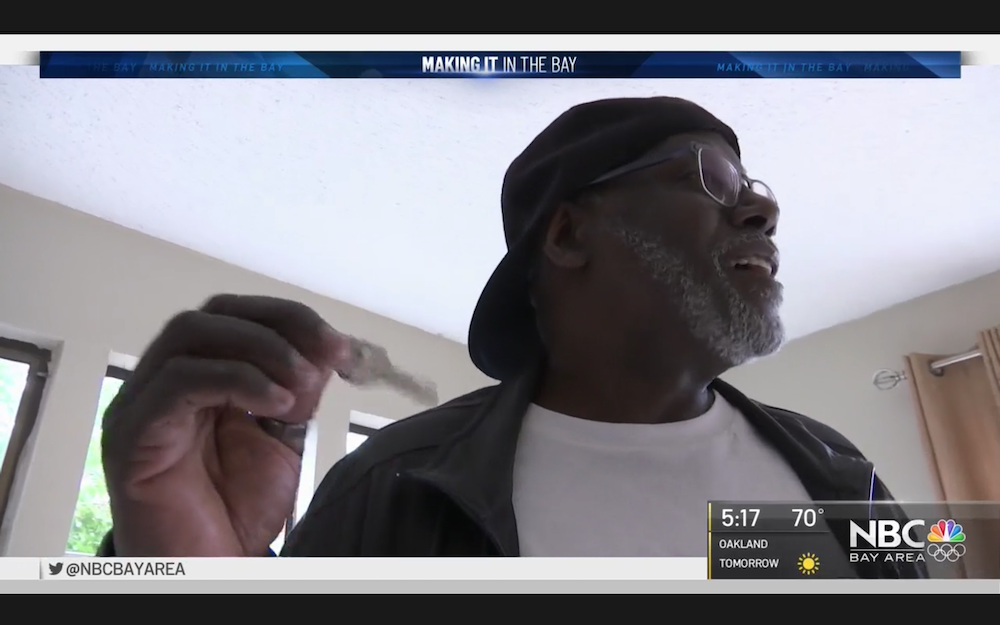 Watch it all happen on the NBC Bay Area News segment linked at the top of this post. We are so proud of Mariah and the good work she is doing!

"When I watched this story," said Abio co-founder Cameron Platt, "I was floored at how far above and beyond Mariah, one of our founding agents, went for a veteran client to ensure that he was able to purchase a home in the Bay Area against all odds, and that he could take pride in his new digs. Mariah is quite possibly the hardest working Realtor I know."

Abio Properties is a boutique real estate agency with offices in Oakland and Lafayette. We are committed to giving back to the East Bay community through volunteer and charity work. As co-founder Cameron Platt said recently, "We prioritize empathy over ego, and character and personality over production."