UPDATE: Oakland Home Sells for Over Asking, Raises Even More for Charity!

Last month we told you about our inspiring client, Josip Markus, who put his Oakland house for sale in Upper Rockridge and pledged to donate $100,000 to a foundation dedicated to helping indigenous communities in the Brazilian Amazon rainforest.

Well, not only did Josip’s story garner media attention from NBC Bay Area News, the East Bay Times, and The Montclarion, but it also raised even more money for his chosen charity, The SOFIE Foundation.

Listing agent and Abio co-founder Linnette Edwards was so inspired by Josip’s generosity that she decided to donate 20% of her commission to The SOFIE Foundation. What’s more exciting is the buyer’s agent, Brian McCarthy, pledged to donate 10% of his commission. Together, that’s nearly $10,000!

One good deed sparks another, and another…  Now Josip, who recently joined SOFIE’s executive team in a volunteer role, tells us that the nonprofit received additional pledges of at least $5,000 since his story ran. And Josip donated $1,400 from the sale of possessions he can’t take to his next home.

Josip, a life coach and former business executive in the exoskeleton industry (wearable robotics), is moving to Ohio to help his father, who has been battling Parkinson’s for 13 years.

When Josip put his home on the market, he knew he wanted to make this move about more than a real estate transaction. He’s not a wealthy man by Bay Area standards and giving up some of the sale proceeds would hurt a bit. But, as he told NBC reporter Garvin Thomas:

“I needed to make a statement to myself and to everyone that this (supporting indigenous communities) is really that important to me.”

From Rockridge to the rainforest

The catalyst for his donation to SOFIE (Saving Ourselves from Indigenous Extinction) was a life changing trip to the Brazilian Amazon rainforest in 2016 for a cultural immersion with the indigenous Yawanawá tribe. There he learned that the Yawanawá community is striving to revitalize and protect its native language, spiritual traditions, medicinal knowledge, and ancestral wisdom after years of interference from the outside world.

Josip returned to the Yawanawá community in 2017 and again in February this year. He’s planning to lead a group there in January 2020.

“Over the past couple of years, I’ve developed a very deep connection to this indigenous community and the approximately half million acres of Amazon rainforest that they call home,” Josip told us.

The SOFIE Foundation is a global organization that has been supporting the Yawanawá tribe’s efforts on rainforest conservation, medicinal plant research, building an education center, replacing diesel with solar power, and producing a feature-length documentary about the last days with 103-year-old shaman Tatá Yawanawá.

Brian, who represented the buyers, said his clients started with a smaller budget in mind but were so moved by this story that they had to be part of it.

“In the end, they felt so connected to the cause that they decided to stretch their budget to be able to start their family in a home with such great energy,” Brian said.

“Josip openly asked me, ‘What if we could make this sale of the home more than just a business transaction?’ and that was really so enlightening,” Linnette told the East Bay Times. “(My reaction) was a blend of a wow factor and a humbling factor. In 17 years in doing business, I’ve never had a client come to me and say I want to donate such a substantial amount toward a cause that he feels so passionately about.

“And when he said that, it just moved me and inspired me to say, ‘I want to support you and what you have going on’ and I would like to provide part of my commission to go toward your cause,” she continued.

Talk about a win-win situation for everyone involved! Let’s keep making an impact! 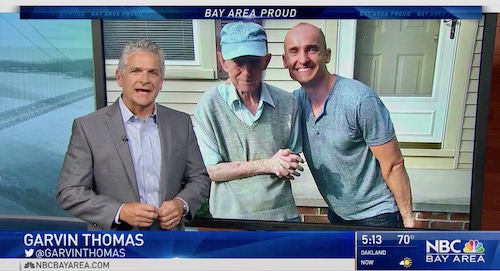 Are you inspired by Josip’s story and want to know more about how you can pay it forward through your own home sale? Check out Abio Impact and see how Abio Properties is changing the way people think about real estate. Contact us anytime at 888-400-ABIO (2246) or hello@abioproperties.com.