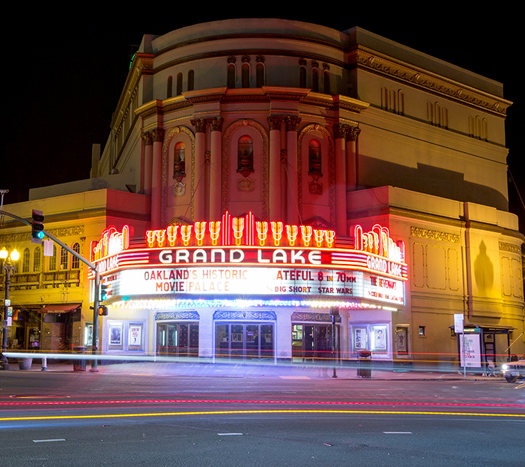 Summer blockbuster season is here, and Oakland plays a starring role in two of the most highly anticipated films. So grab some popcorn and settle in as we preview these breakout indie films that had Sundance buzzing earlier this year and have us buzzing with hometown pride.

Watch the latest trailers below.

Sorry to Bother You,  in theaters now

In “Sorry to Bother You,” Boots Riley set his directorial debut in his hometown of Oakland, where he and his crew attracted plenty of attention while filming this quirky sci-fi satire last summer.

“The story and my understanding of the world and everything springs out from this geographical spot,” Riley told The Chronicle during filming.

“Sorry to Bother You” tells the story of a black telemarketer who uses a “white voice” to move up the ranks. He lives in an Oakland garage with his activist-artist girlfriend. The star-studded cast includes Danny Glover, David Cross, and Patton Oswalt.

You’ll see plenty of visual nods to Oakland, and the unique title graphics and fonts were created by Riley’s friend and Oakland native J. Otto Seibold, who illustrated the popular children’s book “Olive, the Other Reindeer.”

The surreal feature, a hit at Sundance this winter and the centerpiece of the San Francisco International Film Festival in April, is hailed as an original, darkly funny and biting look at contemporary life and identity politics.

The San Francisco Chronicle called it “a supercharged onslaught of dark comedy, magical realism, and social commentary.” Indiewire called it “whip smart.” And it rated an impressive 95% “fresh” on Rotten Tomatoes.

Riley studied film at San Francisco State University and fronted the hip-hop band The Coup, which released an album titled “Sorry to Bother You” in 2012.

Daveed Diggs (“Hamilton”) and Rafael Casal (“The Away Team”) co-wrote and star in this dramedy inspired by their lifelong friendship and growing up in Oakland.

Billed as a provocative hometown love letter, “Blindspotting” tells the story of Collin (Diggs), a parolee who is trying to make it through his last three days of probation. But best friend Miles (Casal) is a magnet for trouble. The film takes place in today’s changing Oakland landscape.

The film, which hits select theaters on July 20 and shows in wide release on July 27, has been described as hilarious and heartbreaking. Variety called it “the most exciting cinematic take on contemporary race relations since Spike Lee’s ‘Do the Right Thing’ nearly 30 years ago.”

Oakland co-stars as “a city bursting with color, from street-corner murals to the way the locals express themselves,” according to one Sundance reviewer.

Casal and Diggs use hip-hop, rap, and spoken word to convey characters’ passion within key scenes. Watch this trailer for a taste:

While filmmakers’ love affair with Oakland isn’t new, it has been growing stronger in recent years. Total filming days in 2017 increased 38 percent over 2016.

Among the recent hits, Oakland also got the winter blockbuster, “Black Panther.” Even though it was mostly shot in Atlanta, the film embraces several scenes in Oaktown, where director Ryan Coogler was born.

Coogler made it even more personal by surprising fans at the first public screening of “Black Panther” at the Grand Lake Theatre, where he shared memories of seeing films there with his father. The theater also hosted a private screening for Coogler’s friends and relatives, rappers M.C. Hammer and Mistah F.A.B., and Oakland mayor Libby Schaaf. The mayor proclaimed Feb. 16 as “Black Parents Day” and honored Coogler’s mother and father.

“Black Panther” has made a lasting impact on Oakland: Disney pledged $1 million of the film’s proceeds to a dozen Boys & Girls Clubs, including Oakland’s, for science, technology, engineering, and math programs.

We look forward to more big screen scenes of our diverse Oaktown in the future.

As Roger Ebert would say, see you at the movies!

Do you have a favorite locally filmed movie? Tell us! As much as we love talking about real estate, we also love seeing our beloved East Bay on the big screen. Contact Abio Properties at 888-400-ABIO (2246) or hello@abioproperties.com.