Tax Reform and Real Estate: Who Are the Winners and Losers?

It’s a new year filled with new laws – from the useful, to the quirky, to the expensive. Pot is legal now in California, public diaper-changing stations must be accessible to men as well as women, the state minimum wage rose $.50, and President Trump signed a major federal tax reform bill.

For property buyers and sellers, we boiled down the 1,097-page federal “Tax Cuts and Jobs Act” into this simple chart so you can see how tax reform impacts you: 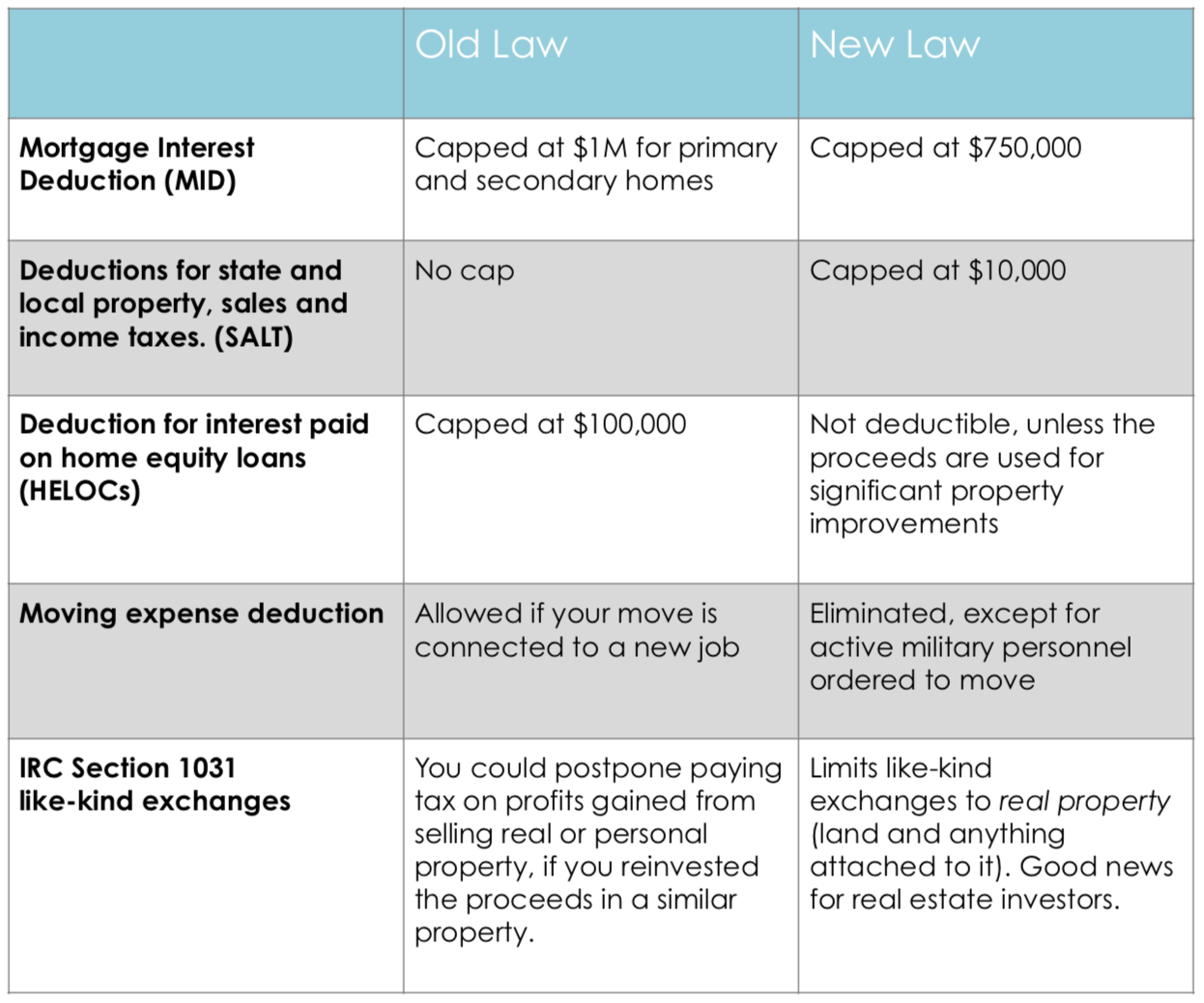 When will I feel the effects of the tax overhaul? Spring of 2019, when you file taxes for 2018, if you itemize deductions.

Which real estate markets will be most affected?

West and East Coast metro areas like ours, where real estate is most expensive. For example, homeowners used to be able to deduct the interest paid on a mortgage loan worth up to $1 million. Now the mortgage interest deduction (MID) cap is $750,000. Nationally, most people’s home mortgages don’t exceed $750,000. But in the pricey Bay Area, you could be hit. (If you’re one of these homeowners, you used to be able to deduct up to $33,260. Now it’s $24,945.)

Here’s another reason why the Bay Area could be hit harder than other parts of the nation: You used to be able to deduct the amount you pay in state and local taxes – property, income and sales — from your federal tax return, without limit. But now your SALT deductions are capped at $10,000. California has some of the highest taxes in the nation. According to the National Association of Realtors, about 20 percent of homeowners in the SF-Oakland-Hayward metro area pay more than $10,000 in real estate taxes alone.

Does the new MID cap affect me if I took out a loan before 2018?
The cap applies to new mortgages, not existing ones. Loans before Dec. 15 are grandfathered into the previous $1 million cap.

Will the changes affect housing prices? No one knows for sure yet, but Moody’s Analytics estimates that housing prices will drop about 4 percent nationwide by the summer of 2019. This Washington Post article quotes other economists who think the changes will slow price increases in expensive housing markets but not lower prices.

—
To learn more about how tax reform will affect buyers, sellers, and the Bay Area real estate market in general, contact us at 888.400.ABIO (2246) or hello@abioproperties.com.